There’s an awful lot of hypocrisy out there, from Media Matters to the dog pound. See just how thick it can get in today’s fun-filled edition of Fox Haters Week in Review!

Once again we begin our survey at Ground Zero for Fox-bashing, David Brock’s Media Matters. We have not come across Julie Millican before; she is described as a ‘researcher’ for MM. As part of what she called a Fox & Friends ‘continued crusade against Park51’ (a claim we will more fully address later), Julie M complains that they interviewed Terek Fatah of the Canadian Muslim Congress. Literally putting two and two together, she headlines:

Only on Fox would this considered [sic] widespread Muslim opposition.

But there’s a problem. You can watch the entire interview, from top to bottom, and at no point does Brian Kilmeade or ‘Fox’ ever say anything about ‘widespread’ Muslim opposition. Or ‘extensive’ or any other synonym. Julie M just made that up! And why not? It makes for a snappy, sarcastic headline--even if it’s something ‘Fox’ didn’t say!

Another MM piece is even more preposterous--and what do you know, it’s another contribution from Julie M!

Julie’s railing against Fox & Friends, O’Reilly, and others for claiming that Nancy Pelosi called for an investigation into who’s funding mosque opposition, when it’s perfectly obvious she never said any such thing. Well, here’s what Pelosi said:

I join those who have called for looking into how this opposition to the mosque is being funded.

’Look into’ is defined as: investigate! But ignore all that. Pelosi issued a ‘clarification’ that added to but didn’t retract her call to examine the funding of mosque opponents. But to Julie M this ‘clarification’ is proof that Pelosi never called for anyone to look into this funding. Why that’s just ‘nonexistent!’. With this sort of intellectual depth and honesty, Julie Millican is well on track to earning the highly esteemed title of ‘Media Matters Senior Fellow’.

Of course, MM is known not just for mendacity, but also for galloping hypocrisy. Chris Golas has been honing in on that, noting that while raising a stink over a donation to Republicans by News Corp, the MMers have adopted a ‘don’t ask, don’t tell’ policy regarding a much-larger donation to Democrats from CNN’s parent company. Since so many media outlets ‘rip ‘n’ read’ data from MM, it’s no surprise that when Jessica Yellin and Rick Sanchez focused on the $1,000,000 donation by News Corp, they neglected to mention the $2,300,000 from Time-Warner to Democrats (72% of their contributions).

Of course, Media Matters can’t let any of these inconvenient facts stand unchallenged, so who pops up to do damage control? None other than our old pal, the discredited fabulist and ‘Senior Fellow’ Eric Boehlert. Mr Golas takes him on, asking ‘How dumb are you?’ For the answer to that question, read Chris Golas’s point-by-point refutation of Boehlert’s boehlony.

But there’s even more hypocrisy from Brock’s brigade. They have been riding a hobby horse in recent weeks about Fox’s contributors--people who sign a contract to appear on Fox News to express their partisan political viewpoints. Of course all news channels hire people for this purpose, yet for some reason MM has concocted an ‘ethical’ problem with the ones who work for FNC. They’re doing ‘unethical’ things, like raising funds (Dick Morris, Newt Gingrich), working for political campaigns (Morris), advising them (Gingrich), or making endorsements (Sarah Palin).

Now mind you, Media Matters has decreed that this is only ‘unethical’ when it’s done for Republicans. Fox contributors like Joe Trippi can make endorsements and work for (D) candidates like Jeff Greene and Andrew Romanoff and the MMers don’t even raise an eyebrow. Bob Beckel can advise the Obama campaign without Media Matters even mentioning it. The more cynical among us might get the idea that MM only focuses on the (R) contributors to make FNC look one-sided. That couldn’t possibly be the case, could it?

But there are some news channel contributors Media Matters seems to have overlooked. How about hosting a fundraiser for a (D) Congressional candidate? Perhaps you should ask MSNBC’s Karen Finney and CNN’s Paul Begala about that. Here’s someone actually part of a campaign to elect a (D) New Orleans mayoral candidate. Oh, the ethical quandary that MSNBC’s Melissa Harris-Lacewell found herself in...if anyone had ever mentioned it. Meanwhile, someone’s headlining a fundraiser for Senate candidate Robin Carnahan. Get on this story, Media Matters! Oh wait, it’s a Democratic candidate, and the headliner is CNN’s Donna Brazile. Never mind.

One additional note: There is an organization whose stated purpose is electoral victory for the Democratic party. And there is a prominent cable news personality who is not a mere contributor but a primetime host of his own nightly show. He has not only signed up with this outfit, but has raised money for them. How much more partisan can you get? But somehow MM has never raised their issue of ‘ethics’ with regard to Keith Olbermann. Media Matters’ rampaging double standards with this whole concocted kerfuffle represent hypocrisy in its most virulent form. It’s more than hypocrisy. It’s hypBrockrisy.

That News Corp donation we referenced above has been a hot topic on the interwebs, as you knew it would be. But many Fox Haters have decided that the truth is an insufficiently incendiary headline, so they have to falsify the story to ramp up the incitement quotient. Chris Golas noticed this tactic being used by the unreliable propagandists of News Corpse:

A blog called "NewsCorpse" did just that with the headline: Fair And Balanced Fox News Funds GOP. In one word that is WRONG. News Corp donated the money to the RGA-NOT FOX NEWS. How dumb can someone get?

One alternative explanation is not that they’re dumb; they just think their readers are. After all, to claim that News Corp’s donation affects the companies they own would mean arguing that because of the contribution, Family Guy, Glee, and The Simpsons are nothing but GOP propaganda. Not to mention Avatar, X-Men, the National Rugby League, and Australian Golf Digest! So to disguise the stupidity of such transparent claptrap, instead they falsely state the donation came from “Fox News”. And the echo chamber is off and running:


So how long did it take for that fountainhead of misinformation, Cenk Uygur, to embellish this falsehood even further? Not long:

Fox News finally made it official. They are part and parcel of the Republican Party. They are now the largest donors to the Republican Governors Association, having given them $1 million dollars.

It’s astonshing how easily lies flow from Mr Uygur’s keyboard. Almost as easily as drivel flows from his mouth. You may recall that Keith Olbermann was caught doing a rip ‘n’ read of a factually-challenged Media Matters story. But what’s been overlooked is that just a few hours earlier, on the same ‘news’ channel, Chunk parroted the same attack. With the same dubious quote. And the same falsehood about Ted Nugent at Beck’s rally. Another rip ‘n’ read. Just how many MSNBC shows does Media Matters program, anyhow?

On a lighter note, there are all sorts trawling the interwebs. Every now and then one of them pops up from out of the blue, looking to impress his buddies by coming after your humble blog correspondent. This one claims to reside in Tehran: 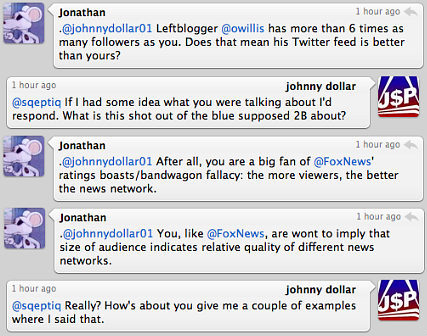 After several minutes of silence, finally a response:

It took Jonathan twelve minutes to come up with this devastating riposte:

He never did cite those examples.

We’ve written about how the newshounds cherry-pick to fit their predetermined memes. Recall the Media Matters claim noted above about the Fox & Friends ‘crusade’ against the ‘ground zero mosque’? The whippets have eagerly jumped onto that bandwagon, even if it means telling one lie of omission after another. Because Fox News ‘promotes anti-Mosque activism’ and ‘anti-Muslim hysteria’, according to Priscilla. Why, they even went so far as to actually interview a 9/11 family member! Horrors! You see, for Prissy this was all a part of their ‘jihad against President Obama and the mosque’.

But wait. On that same day, Fox & Friends did a second interview, this one with mosque supporter Christine Quinn. What kind of anti-mosque jihad is that? Well Prissy doesn’t have to answer that question, since she never posted about the Quinn segment. In a startling coincidence, just today Priscilla pulled the same trick. She wrote about another F&F show where a mosque opponent was on, and again said nothing about the interview that followed with pro-mosque Jim Wallis. Now why would Priscilla use one interview on a program as proof of an ‘anti-mosque jihad’, and then carefully not include an interview on the same program that gave the other side? And do that twice in one week? That’s the least mysterious question since ‘What time does the 5 o’clock news begin?’

This whole mosque deal seems to have rendered Priscilla even more unhinged than usual. For example, in one of her manic personal attacks she writes:

That link she gives to prove her claim about what FNC ‘dubbed’ her? It goes to another newsmutt article that says Burlingame was ‘billed as merely a 9/11 victim’, not as an ‘official spokesman’. In another paroxysm of vitriol Prissy rails against Burlingame in a truly McCarthyesque cacophony of guilt-by-association, name-calling, and personal attacks.

So when you run out of lies about Fox News, then go after the guests! Personal smears preferred. One post excoriates Brigitte Gabriel, who is not a Fox News host, reporter, or contributor. Apparently just the fact that she’s allowed on air is evil. But she’s a ‘Fox News regular’. She is?!? Well yeah. Ellen Brodsky cites three--count ‘em, three!--appearances over the last four years. Just don’t tell CNN about that. Ellen goes on to slam Gabriel for ‘the now-debunked smear that Obama attended a Muslim school’. Yeah, that’s quite a smear. It’s not like he went to his school’s Koran study classes or anything.

Brodsky’s back with a headline screaming:

Yes, death threats. You know, like this. But again, why are the mongrels attacking the opinions of a guest? Why not do something a little more relevant? The headline could just as easily read:

Oh wait, that doesn’t fit the meme, does it? OK, smear the guest instead.

If there’s a theme to this FHWiR, it’s hypocrisy. That’s a quality found in abundance amongst the newshounds. But now it’s going to 11. Follow. The mongrels have been on the case of ‘questionable, high-pressure’ tactics from a company that may be ‘bilking’ its customers. Yes, Goldline. And the kennel-dwellers have yelped on cue:


Actually, ‘this sort of sleaziness’ is also endemic to the dog pound. Look at what we saw this week in a visit to the tail-waggers:

Whoa! It seems that advertising money bilked from unsuspecting targets as part of a sleazy fear mongering con game suddenly becomes perfectly acceptable--when it’s flowing into the coffers of Ellen Brodsky and her biased bassets. Welcome to new horizons in houndpocrisy.

Spot something you’d like to see in the next Fox Haters Week in Review? Send us an email!