MSNBC Issues a Challenge. We Accept!

Phil Griffin: ‘Show me an example of us fund-raising.’ Challenge accepted. With MSNBC Video!
In today’s New York Times, Brian Stelter writes about the use of cable news to raise funds for political candidates:

Fox is drawing attention as a fund-raising platform for Republicans. Last week Mr. Kasich was given time to promote his campaign Web site on “Hannity,” a prime time program on Fox News. Mr. Kasich told viewers, “If you have extra nickels or dimes, please send it our way.”

Here is how that went down:

KASICH: So it is a very central race. And, 11 times, Sean, they're coming after Johnny Kasich for 11 times he's going to be here. It's amazing.
HANNITY: Yes.
KASICH: People can come on our website at KasichforOhio.com. Sunday night at 6:30. We're going to talk about the damage the Obama agenda has done to us. And if you have extra nickels or dimes please send it our way.
HANNITY: Well, I --
KASICH: KasichforOhio.com.
HANNITY: I want to put this -- put some emphasis on this because this is really important. Explain to people why -- we cannot afford to lose that race?

This of course was trumpeted, and condemned, by the usual sources, like Oliver Willis at Media Matters (who pontificated that it was ‘a new low’) and the Daily Kos. In the face of all this, MSNBC sought to take advantage of an opportunity. As Mr Stelter reported:

Phil Griffin, the president of MSNBC, and others strenuously object to the idea that Fox and MSNBC are opposite sides of the same coin. “Show me an example of us fund-raising,” he said in a recent interview.

GRAYSON: That‘s why 50,000 people have come to the website, congressmanwithguts.com and made a contribution to our campaign.

That sounds a little solicitationy to us, giving out the website and all. Let’s listen to Michael Dorf, a bigwig in the Alexi Giannoulias (D) campaign, talking to Keith Olbermann:

DORF: We‘re also gathering our own army of volunteers to help out, to man polls, to make sure that every voter has a chance to cast their ballot. It‘s AlexiForIllinois.com. We can use volunteers. We want people to come in and help really bring some integrity into Illinois with Alexi Giannoulias.

Website plug? Check. And definitely a solicitation, if not for money then for volunteers. Olbermann, like Schultz, didn’t even raise an eyebrow. Surprise, Alan Grayson (D) again with Ed Schultz:

GRAYSON: 20 percent of all of the money that‘s been spent by these outside right-wing forces in the entire country has been spent against me.... But luckily for us, we‘ve had people come to our Web site, congressmanwithguts.com. Over 80,000 contributions so far -- 80,000 people have contributed to our campaign.

Wow, that’s 30,000 more contributions since the last plug on MSNBC. No wonder Grayson (who uses MSNBC footage of Schultz and Keith Olbermann in one of his campaign ads) came back for another pitch. Ed showed his enthusiasm with Adam Green, of the Progressive Change Campaign Committee:

GREEN: I would point out that tens of thousands of people went to our Web site, boldprogressives.org, nearly 10,000 people contributed through our web site to Ann McLean Kuster and others signed up to do phone banking from their homes to key target voters....
SCHULTZ: Adam Green, you‘re doing what you have to do. Thanks for doing it, and congratulations. Great work. Keep going.

SCHULTZ: Is he outspending you by what number?
COUSSOULE: Well, he raises million, last I heard he‘s raised over $6 million...

Then, in case you didn’t get the point:

SCHULTZ: I say tonight that the DNC needs to filter money into Justin Coussoule‘s race to go after John Boehner. The Republicans have done a great job taking down leaders in the past like Tom Daschle. They got a lot of national money in South Dakota on that one. Thune beat him. I don‘t know why, we don‘t do the same thing on our side, we‘ll going to have you on again, Mr. Coussoule. Good luck to you. What‘s your website?
COUSSOULE: Coussouleforcongress.com, Ed, or beatboehner.com, that will get you to us.
SCHULTZ: Beatboehner, I like that one. Good to have you with us.

’Why we don’t do the same thing on our side’?? How very Hannnityesque of him. Oh, and when you go the website that Ed Schultz went out of his way to publicize, this is what you see: 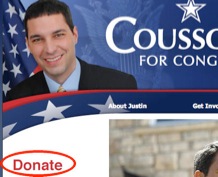 Last but in no way least, here is Jack Conway (D) talking to Schultz on September 8. The topic? What else? Raising money:

CONWAY: Then we had a great internet fund-raising bomb yesterday that raised about $300,000. So, if your viewers want to help us, they can go to Conwayfightfunds.com and help us fight back some of this Karl Rove money.

Um, Mr Griffin? Does that constitute an example of fund-raising on MSNBC? Exactly how was that any different from what Kasich did? Perhaps the video will help you decide:


This is the same Ed Schultz who was talking with unreliable fabulist Eric Boehlert about the horrors of candidates appearing on Fox News:

SCHULTZ: I know that we have restrictions on what we can do here at MSNBC. Over at Fox, across the street, it‘s a totally different story. Is this the way it‘s going to be, Eric?
ERIC BOEHLERT, MEDIA MATTERS FOR AMERICA: This is the way it‘s going to be. Fox News is now essentially a PAC. They‘re a political action committee....
SCHULTZ: And, Eric, there‘s no legal ground here. There‘s no—I mean, they‘re perfectly legal in the way they‘re putting candidates on and just blatantly asking for money....

This conversation took place on October 15, immediately after Alan Grayson talked about raising money and gave out his website. Again.

If it is inappropriate for a cable news channel to let politicos solicit money, volunteers, or whatever on its air, then it’s inappropriate for everyone, not just Fox. But have you heard anything from Media Matters, Think Progress, and the other ‘media watchdogs’ about MSNBC’s fund-raising? Where was Oliver Willis to deem this ‘a new low’? Instead of Eric Boehlert calling out MSNBC, he looks the other way while repeatedly going on their air! Today’s New York Times article makes on-air fund-raising look like something that only happens on Fox. Not one example from MSNBC is cited--not even Jack Conway’s open solicitation that replicates Kasich’s. But maybe the Times hasn’t gotten around to the Conway matter yet. After all, it only happened six weeks ago!

Phil Griffin, we accepted your challenge and we met the test. Is there a prize? We’re not asking for anything big. How about this? You apologize, in the New York Times, for your false claim that MSNBC doesn’t allow fund-raising on its air. Do that, and we’ll call it even.