Our favorite tail-wagger proves Americans are not generous and exonerates CAIR. But there’s a catch.
Priscilla of the newshounds has been lying (by omission and commison) since she joined that rabid pack. Her reward was to be elevated to full-dog status. And those canines have something in common with leopards: they don’t change their spots. She recently complained that Martha MacCallum dared to interview a Muslim Prissy doesn’t like (because he doesn’t oppose the Peter King hearings):

Keep bringing us that "dirty laundry," Martha! It's so "fair & balanced.”

But there’s a catch. Wasn’t Al Sharpton also a guest on that same program, opposing the hearings? Well yes, but Priscilla is careful not to reveal that. It might show that her definition of ‘fair and balanced’ is not allowing anyone on the air who disagrees with her. She has some work to do on fact-checking as well:

[Ted Nugent] said that Americans are more generous. According to the Bill Gates foundation, aid as a percentage of GDP puts Scandanavia and the Netherlands at the top of the list.

Prissy is eager to bad-mouth Americans, but that doesn’t justify her phony comeback. She cites an irrelevant weighted chart of foreign aid from governments. What does that have to do with how generous Americans are? The truth: according to the Charities Aid Foundation, Americans are not just more generous--they’re the most generous. They computed it four different ways, and they all end up with the American people #1 in the world for charitable giving. Nugent right, Prissy wrong.

That’s a classic newspoodle incorrection, but there’s more where that came from, as Priscilla attacks MacCallum over the issue of CAIR being on a list of unindicted co-conspirators. Citing a Politico blog post (and a Jewish Journal article based on it) Priscilla declares the case closed:

Ergo, CAIR is not, as MacCallum said, "on that list.”

But again, there’s a catch. Prissy, who’s not a lawyer but plays one on the interwebs, concocts a phony argument by completely misrepresenting an Appeals Court case. Without bothering to read the decision herself she relies on the Jewish Journal:

In a decision that could inhibit efforts to stigmatize some Islamic groups, a U.S. appeals court ordered that a lower court’s reference to a group’s association with Hamas be expunged.

First of all, CAIR didn’t file an appeal, so they weren’t even a party to this decision. What’s more, the Appeals Court actually refused to expunge the connection to Hamas:

the district court did not abuse its discretion in declining to expunge the mention of NAIT in the newly sealed attachment....we REVERSE the district court’s order only insofar as it requires that the opinion and order be sealed. All other requests for relief are DENIED.

The only thing the Appeals Court changed was to make the lower court hearings public. And when they became public Josh Gerstein did a follow-up for Politico revealing what they showed:

In a secret court ruling earlier this year, a judge denied a request by three prominent American Muslim organizations to reverse federal prosecutors’ designation of the groups as unindicted co-conspirators in a criminal case alleging illegal support for Hamas....An attorney for CAIR, Nadhira Al-Khalili, declined to comment on Solis’s ruling.

Contrary to Priscilla and her great sources, the Appeals Court refused to expunge that designation. Not that it would matter to CAIR: they didn’t even file and weren’t part of the appeal in the first place! Does this look like another case of MacCallum right, Prissy wrong? Will we get a correction and an apology to Martha MacCallum? That’s not Prissy’s way. Example: here she is playing netroots Nostradamus:

Will Fox News Report That Catholic Bishops Support Union Protesters???...Will the good Fox Catholics,(Doocy, Kilmeade, Hannity, O'Reilly) who are denegrating the unions at every turn, tell their Catholic fans that Milwaukee Archbishop Jerome Listecki said "hard times do not nullify the moral obligation each of us has to respect the legitimate rights of workers?" Will Fr. Morris tell his Fox flock that the present pope is and his predecessor, on the road to sainthood, was a supporter of labor unions? If Fox were truly "fair & balanced," this would be mentioned. I'm not holding my breath...

We’ve been waiting for days now to hear from Priscilla about this: 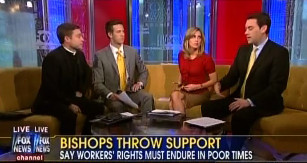 Surprise! Something else Prissy has studiously avoided telling her credulous readers. Finally, just for giggles, here’s some of Priscilla’s most brilliant argumentation, from the Ted Nugent screed referenced above:

Nugent wanted to know if Huckabee could name a cool rock and roll song from France. Nugent forgets that the Beatles, not from America and infinitely more talented than Nugent, had a profound impact on music.