Is nothing sacred? The newshounds exploit Martin Luther King Day to attack black Americans...and to make one disappear. And there’s the catch.
We happened to notice another post by one of our favorite newshounds. He’s someone who, for reasons known only to himself, insists on being called ‘Aunty Em Ericann’. This, of course, keeps his real identity (and lack of credentials) a deep, dark secret. He-Who-Shall-Not-Be-Named has struck again with his latest venomous diatribe aimed at Fox & Friends, larded with the usual vitriolic personal attacks:

Really? It always falls on a Monday? How revelatory.

The Foxy friends at Fox and Friends played host to two separate guests on Monday, both of whom knew precisely what Martin Luther King would think: Star Parker and MLK’s own niece, Alveda King. One would think that Star Parker would have lost all credibility in speaking to the Black experience (despite her obvious pigment)...

You would think that a website that proclaimed its writing staff to be all white wouldn’t have standing to question anyone else’s ‘Black experience’. But self-awareness is not one of Anti-Americann’s strong points. He then turns to his other target:

Alveda King previously came under criticism when she linked up with Glenn “Where Is He Now?” Beck and gave that huckster a respectable façade at a time he was being criticized for trying to usurp King’s legacy by holding his “Restore Honor” rally on the anniversary of King’s “I have a dream” speech. As Daniel Denvir wrote in Salon...:

Wait! Who died and made Daniel Denvir, whoever the frack he is, God? What does Denvir have to do with this? Other than writing a year-old attack piece on Alveda King: nothing. Anti-Americann cites quote after quote from Denvir to obscure the fact that ‘Aunty’ cites nothing--not one statement--from Alveda King’s interview. It’s basically: hey there was an interview, Alveda King is bad, here’s an irrelevant hit-piece to muddy the waters, figure it out yourself.

This is typical ‘Aunty Em’, but so is something else. Let’s go back to the beginning once again. The part where Anti-Americann didn’t tell the truth:

The Foxy friends at Fox and Friends played host to two separate guests on Monday, both of whom knew precisely what Martin Luther King would think...

And there’s the catch. Hidden behind all the ad hominem smears and extraneous quotes is what ‘Aunty’ purposely didn’t say--what he doesn’t want any of his credulous readers to know about. Because it would utterly destroy his fabricated claim of ‘talking points’ and ‘memes’. What would that be? There weren’t two guests who appeared that morning. There were three. Who was the mystery third guest, the one ‘Aunty’ wants to pretend didn’t exist? See for yourself: 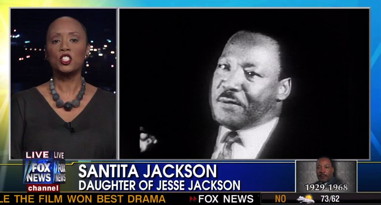 Wait? Is that the same Santita Jackson who is the daughter of Jesse Jackson? Who produced Jesse Jackson’s broadcasts? Who writing is published by thegrio.com? The answer is, yes. And she is about as far as humanly possible from the ‘right wing talking points’ and ‘memes’ ‘Aunty’ was insisting permeated Monday’s Fox & Friends.

Fox gave Santita Jackson a full program block to talk about Dr Martin Luther King from her perspective, and her statements conflicted so blatantly with Anti-Americann’s chosen smears about ‘talking points’ that ‘Aunty’ had to lie and pretend that Ms Jackson didn’t exist. So he dishonestly claimed only ‘two separate guests’ talked about the King legacy. Yes, He-Who-Shall-Not-Be-Named lied by omission to hide the empty dishonesty of his own phony smear. In other words, another day’s work for Anti-Americann.