The Definition of Insanity

Religious discrimination at Fox News exposed! But there’s a catch.
There’s something to be said for congenital liars. At least they’re predictable. And say, that reminds us of Miss Priscilla, who holds the esteemed Ian Paisley Chair for Anti-Catholic Bigotry at the newshounds. What is it this time? Oh you know, her idee fixe:

But there’s a catch, and it involves the story of someone who is not a writer for Ellen Brodsky’s smear site and does not hate Catholics. This person is a respected community leader, educated at the New York Theological Seminary, who served as Executive Adjunct to Suzan Johnson-Cook, president of the prestigious Hampton University Minister’s Conference. A prominent liberal activist, he was New York President of Rev Al Sharpton’s National Action Network. He was recently honored by the Consulate General of Israel with the Martin Luther King Award for ‘spreading compassion and uniting communities of all backgrounds’. A most distinguished curriculum vitae for this man, a minister at New Canaan Baptist Church in Harlem.

His name is Jacques de Graff, and if that sounds familiar to you, perhaps that’s because you’ve seen him many times on Fox News Channel. Yes, contrary to what Miss Prissy would have you believe, Rev de Graff is a ‘liberal Protestant clergyman’...and a Fox News contributor: 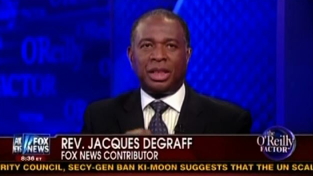 Of course Miss Prissy might have forgotten that appearance. It was some time ago...two days! After all Rev de Graff has only been a contributor at FNC for close to a year now. You might wonder how ‘we watch Fox so you don’t have to’ Priscilla again could possibly be ignorant of something even a semi-regular viewer would know. Pack leader Ellen Brodsky insists that her writers do watch FNC:

[Dollar] falsely accusing us of not watching Fox, when I can assure him that we do.

Then are we to conclude that Miss Prissy knows about Rev de Graff and is simply lying? Again?

If all this has a deja vu feel to it, there’s good reason. It was only two weeks ago when Priscilla’s diseased obsession with Father Morris erupted in more fabrications about the people who work at Fox News. You may recall the irony of her vainglorious words:

But unlike Fox (and Johnny's man crush, Bill O'Reilly) I am perfectly willing to stand corrected.

It’s now two weeks since Miss Prissy falsely claimed Fox News has ‘no regular African-American host’, and told her readers that Arthel Neville is not a regular host on FNC. It is also two weeks since we exposed these lies. But far from being ‘willing to stand corrected’, Miss Prissy has not retracted her falsehood about Arthel Neville, who anchors America’s News Headquarters: 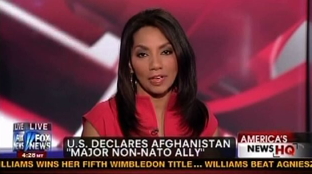 Of course Miss Prissy might have forgotten that appearance. It was some time ago...yesterday! Needless to say, neither has Priscilla corrected her lie of omission about Harris Faulkner, who is only the most prominent, and most watched, black straight news anchor on US cable news. But remember, Priscilla is ‘willing to stand corrected’.

See the pattern? Falsify facts, get caught doing so. Wait two weeks, repeat, and get caught again. When you do the same thing over and over expecting something different, but keep getting the same result...what do they call that again?