Fox haters never let a tragedy go to waste…especially when it’s another opportunity to lie!

We’ve been trying our best to stay away from the fevered swamp of the Fox haters, but given recent events and the season, something has to be said. It’s no surprise that Ellen Brodsky and her diseased dachshunds would use any opportunity, even the tragedy in Newtown, to promote their venomous hatred. Before the bodies were cool, Brodsky and her brood were looking for angles to play the event to their advantage. Naturally, Priscilla took point, as she is not just a serial liar but an anti-Christian bigot to boot. And so began the attacks, fleshed out with a meme created for the occasion: we don’t object to statements of faith, but Fox may just be anti-Semitic because they refuse to put on anyone to speak from the Jewish perspective while making a priest the only authority on faith. (Pretty presumptuous line of attack given their spotty record on matters of anti-Semitism.)

They flogged their meme on Sunday. Here’s Sharia Ellen Sunday night serving up the propaganda to her gullible twitter followers:
These salvos, of course, merely played off the talking point Prissy created:

The Fox religious message was clear and, considering that the shooting happened during Hannukah, which ends tonight, very Christian…While Fr. Morris' Christian words might be inspirational, to some, shouldn't a "Fair & Balanced" news network provide some other religious and non-religious perspectives?

Sunday evening, even as the populace of Newtown gathered for a solemn memorial, Priscilla continued to spread the hate:

And while 70% of Newtown's population is Catholic there are other groups - 6%, Jewish and 10% of the 24% of "other" groups are liberal mainline Protestants as well as 2% Muslims. But on Fox, the religious perspective, so far, has been from the Catholic Fr. Jonathan Morris and the evangelical Mike Huckabee.

But there’s a catch. Prissy is not telling the truth. That same day, long before Priscilla posted the above, this was airing on Fox News: 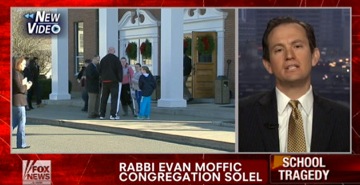 But according to Ellen Brodsky Fox is keeping Jews and Rabbis off the air. Where did she get that idea from? Maybe from Priscilla. And where did Prissy get that idea from? She made it up! What other explanation could there be? It’s not like Fox was keeping this a secret; the interview sits right out in the open on their website. Remember, Ellen has repeatedly insisted that any suggestion that they don’t really watch FNC is false:

[Dollar] falsely accusing us of not watching Fox, when I can assure him that we do.

So that would mean Priscilla knew she was smearing Fox with a bald-faced lie but went ahead and did it anyhow, just to paint FNC as exclusionary and vaguely anti-Semitic.

It’s bad enough to exploit a tragedy to make hate-filled agenda-driven attacks. But to falsify the truth, to concoct a notion of anti-Semitism and then blatantly lie to ‘prove’ your case…that is despicable even by the seamy, degenerate ‘standards’ of the newshounds.